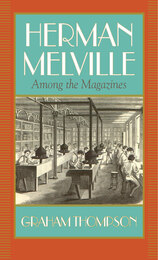 Herman Melville: Among the Magazines
by Graham Thompson
University of Massachusetts Press
Paper: 978-1-62534-324-6
"What I feel most moved to write, that is banned,—it will not pay. Yet, altogether, write the other way I cannot." Herman Melville wrote these words as he struggled to survive as a failing novelist. Between 1853 and 1856, he did write "the other way," working exclusively for magazines. He earned more money from his stories than from the combined sales of his most well known novels, Moby-Dick, Pierre, and The Confidence-Man. In Herman Melville Graham Thompson examines the author’s magazine work in its original publication context, including stories that became classics, such as "Bartelby, the Scrivener" and "Benito Cereno," alongside lesser-known work. Using a concept he calls "embedded authorship," Thompson explores what it meant to be a magazine writer in the 1850s and discovers a new Melville enmeshed with forgotten materials, editors, writers, and literary traditions. He reveals how Melville responded to the practical demands of magazine writing with dazzling displays of innovation that reinvented magazine traditions and helped create the modern short story.
AUTHOR BIOGRAPHY
Graham Thompson is associate professor of American studies at the University of Nottingham and author of numerous books, including, most recently, American Culture in the 1980s.