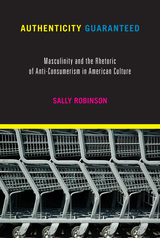 Americans love to hate consumerism. Scholars, intellectuals, musicians, and writers of all kinds take pleasure in complaining that consumer culture endangers the "real" things in life, including self-determination and individualism. In Authenticity Guaranteed, Sally Robinson brings to light the unacknowledged gender and class assumptions of anti-consumerist critique in the second half of the twentieth century. American anti-consumerism, despite its apparent complexity, takes a remarkably consistent and predictable narrative form. From the mid-century Organization Man to the millennial No Logo, anti-consumerist critique reinforces the gender order by insisting that authenticity is threatened, and masculine agency curtailed, by the feminizing forces of consumer culture.

Robinson identifies a tradition of masculine protest and rebellion against feminization in iconic texts such as The Catcher in the Rye and Fight Club, as well as in critiques of postmodernism, academic denunciations of shopping, and a variety of other discourses that aim to diagnose what ails American consumer culture. This fresh and timely argument enters into conversation with a wide range of existing scholarship and opens up new questions for scholarly and political discussion.
AUTHOR BIOGRAPHY
Sally Robinson is associate professor of English at Texas A&M University and author of Marked Men: White Masculinity in Crisis.