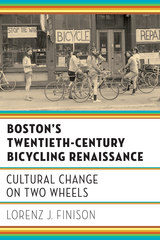 At the end of the nineteenth century, cycling's popularity surged in the Boston area, but by 1900, the trend faded. Within the next few decades, automobiles became commonplace and roads were refashioned to serve them. Lorenz J. Finison argues that bicycling witnessed a renaissance in the 1970s as concerns over physical and environmental health coalesced. Whether cyclists hit the roads on their way to work or to work out, went off-road in the mountains or to race via cyclocross and BMX, or took part in charity rides, biking was back in a major way.

Finison traces the city's cycling history, chronicling the activities of environmental and social justice activists, stories of women breaking into male-dominated professions by becoming bike messengers and mechanics, and challenges faced by African American cyclists. Making use of newspaper archives, newly discovered records of local biking organizations, and interviews with Boston-area bicyclists and bike builders, Boston's Twentieth­-Century Bicycling Renaissance brings these voices and battles back to life.
AUTHOR BIOGRAPHY
Lorenz J. Finison is a founding member of Cycling Through History and author of Boston's Cycling Craze, 1880–1900: A Story of Race, Sport, and Society.
REVIEWS
<P>This book is a compendium of stories about people who participated in New England's cycling community as bike builders, racers, advocates, workers, and hobbyists. Admirably, Finison examines issues of race and ethnicity that have been ignored by many previous bicycle historians.</P> <P>Finison demonstrates a remarkable eye for historical detail, making good use of local sources to offer new stories about old bicycling in an approachable, journalistic style. This local history of Boston adds well-researched detail to our understanding of twentieth-century cycling.</P>