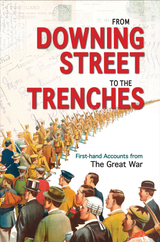 From Downing Street to the Trenches: First-hand Accounts from the Great War, 1914-1916
by Mike Webb
foreword by Hew Strachan
Bodleian Library Publishing, 2014
Cloth: 978-1-85124-393-8
As we look back on World War I on the occasion of its hundredth anniversary, we do so with the benefit of hindsight and the accumulated wisdom of a century of writing and thought. But what was it like to experience firsthand those first few years of war—to see an aerial view of the famous Battle of the Somme? How did key political figures make the difficult decision to go to war? And what did young men of the time believe their role ought to be?

From Downing Street to the Trenches gathers eyewitness accounts and photographs that vividly convey this lived experience. The letters of Prime Minister H. H. Asquith show the strain of wartime leadership and shed light on his later downfall, while letters home from the young Harold Macmillan are suffused with his experiences in the trenches and mark the beginning of his road to Downing Street. Although it was forbidden to record cabinet discussions, Secretary of State Lewis Harcourt’s unauthorized diary provides a window into the government of the time, complete with character sketches of some of the leading figures, including Winston Churchill. In addition to political figures, the book draws on many local records, including the diary of an Essex rector, written to record the impact of the war on his community and parish.

Filled with fear and sorrow but also suffused with hope for the future, the accounts collected here paint a highly personal and immediate picture of the war as it was happening to real people of the time.
AUTHOR BIOGRAPHY
Mike Webb is head of cataloguing of the Western Manuscripts Section at the Bodleian Libraries.
REVIEWS
"These firsthand accounts make us feel the cost borne by those who fought and by the bereft and agonized at home, and also of the sense of purpose and belief in what they were doing, made all the more poignant by hindsight of World War I’s ongoing troubled legacy."
— Washington Times