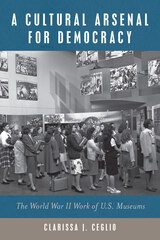 "Does it seem strange to think of a museum as a weapon in national defense?" asked John Hay Whitney, president of the Museum of Modern Art, in June 1941. As the United States entered the Second World War in the months to follow, this idea seemed far from strange to museums. Working to strike the right balance between education and patriotism, and hoping to attain greater relevance, many American museums saw engagement with wartime concerns as consistent with their vision of the museum as a social instrument.

Unsurprisingly, exhibitions served as the primary vehicle through which museums, large and small, engaged their publics with wartime topics with fare ranging from displays on the cultures of Allied nations to "living maps" that charted troop movements and exhibits on war preparedness. Clarissa J. Ceglio chronicles debates, experiments, and collaborations from the 1930s to the immediate postwar years, investigating how museums re-envisioned the exhibition as a narrative medium and attempted to reconcile their mission with new modes of storytelling.
AUTHOR BIOGRAPHY
CLARISSA J. CEGLIO is assistant professor of digital humanities at the University of Connecticut.