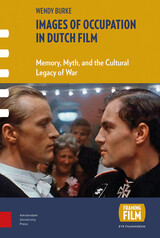 The German occupation of the Netherlands during World War II left a lasting mark on Dutch memory and culture. This book is the first to explore depictions of that period in films made a generation later, between 1962 and 1986. As Dutch public opinion towards the war altered over the postwar decades, the historical trajectory of Dutch recovery and reconstruction-political, economic, and, most complicated of all, psychological-came to be revealed, often unconsciously, in the films of the period.
AUTHOR BIOGRAPHY
Dr Wendy Burke is Teaching Fellow in Culture and Media at King's College London. Her research considers film and media from an interdisciplinary perspective and embraces film and history, culture, identity and memory, representing the past in film, and cultural legacies of war and occupation.
TABLE OF CONTENTS


AcknowledgementsList of Illustrations Introduction 1 Representation, occupation, and Dutch war filmsRepresenting the past: the case of film Nationhood and identity Myth and memory: the re-writing of history The Netherlands and World War Two: German occupation Post-war considerations Dutch film history: an overview Dutch war films: historical and cultural perspectives 2 The image of the enemyWho is the enemy? The end of forgetting: image of the enemy in the early 1960s After the absence: war again on the agenda Growing ambiguity: portrayal of the occupiers in 1986 3 Dutch identity and 'Dutchness'Big skies, far horizons: Dutchness in early 1960s films Speaking the same language?: Blurred boundaries in 1977 Bitter cold, fading Communism: portrayals from the 1980s The legacy of the Dutch landscape, in painting, and in film 4 Life under occupationWe're all in this together: images of family life in 1960s films Division, suspicion, and the war against Dutch Jews Fractured lives, crushed hopes: trauma and the disintegration of family and friends in the 1980s 5 Resistance and collaborationIrresistible resistance: heroic resistance in the 1960s Pushing the boundaries: collaboration breaks through, 1977-1978 Shattered myths, bleak truths: assimilating collaboration and resistance in the 1980s and beyond Conclusion Filmography Bibliography Glossary of Dutch and German terms Appendix Top Dutch films by box office admissions