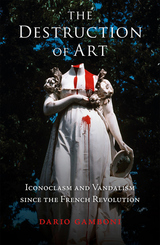 Last winter, a man tried to break Marcel Duchamp’s Fountain sculpture. The sculpted foot of Michelangelo’s David was damaged in 1991 by a purportedly mentally ill artist. With each incident, intellectuals must confront the unsettling dynamic between destruction and art.  Renowned art historian Dario Gamboni is the first to tackle this weighty issue in depth, exploring specters of censorship, iconoclasm, and vandalism that surround such acts.

Gamboni uncovers here a disquieting phenomenon that still thrives today worldwide. As he demonstrates through analyses of incidents occurring in nineteenth- and twentieth-century America and Europe, a complex relationship exists among the evolution of modern art, destruction of artworks, and the long history of iconoclasm. From the controversial removal of Richard Serra’s Tilted Arc from New York City’s Federal Plaza to suffragette protests at London’s National Gallery, Gamboni probes the concept of artist’s rights, the power of political protest and how iconoclasm sheds light on society’s relationship to art and material culture.

Compelling and thought-provoking, The Destruction of Art forces us to rethink the ways that we interact with art and react to its power to shock or subdue.

Dario Gamboni is professor of art history at the University of Geneva. He is the author of many books, most recently Potential Images, also published by Reaktion Books.

“Erudite and entertaining, Gamboni’s book is an excellent guide to the outrageous in art.”