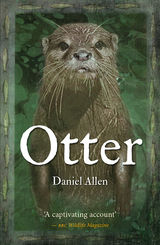 Although rarely seen in the wild, the otter is admired for its playful character and graceful aquatic agility, which were established in the popular imagination through books like Tarka the Otter and Ring of Bright Water. This, however, is just a very small part of their story—throughout history the otter has also been widely hunted for its fur and flesh.  In Otter, human geographer Daniel Allen reveals how the animal’s identity has been shaped by this variety of human interactions.

As Allen explains, otters, while feared by some communities, were hunted to near extinction by others—killed for their valuable pelts in the north Pacific and chased with hounds for sport in Britain. In contrast, Allen describes how Native Americans revered the otter and how indigenous fishermen in parts of Asia trained otters to assist them. Sadly, now all thirteen species of otter are considered threatened, and their survival is by no means certain.

In this wide-ranging look at the otter, Allen incorporates anecdotes from folklore,  sports, popular literature, media, and conservation studies in order to unravel this complicated cultural history. Otter isa lively book that offers a new way of thinking about this admired and endangered animal.

Daniel Allen is a human geographer with expertise in cultural, historical, and environmental geography.

"Daniel Allen gives a captivating account of our changing relationship with the otter—once persecuted, now adored."

“Otter is the most brilliant mix of facts ancient and modern about the otter species and its vulnerability to man’s seemingly insatiable need to hunt the poor animal for reasons other than survival. I am sure the book will help to ensure that the hunting of otters will never return to this country—and I hope other lands will follow this example . . . A fascinating and illuminating book.”

“Did you know that the otter is J K Rowling’s favorite animal? Or that the earliest evidence of its existence dates back 20 million years? Or that the fur of the sea otter is the densest in the animal kingdom? All these and numerous other intriguing snippets of otter lore are contained within a beautifully presented volume as charming and captivating as its subject matter . . . Printed on high-quality paper with gorgeous illustrations on nearly every page . . . you will love this one.'”
— Daily Mail

“Daniel Allen and Reaktion’s accomplished production of Otter befit its exceptionally charismatic and beautiful subject, and skillfully tracks the manner in which conservation lobbying and literature helped transform the otter from victim to survivor. It is to be hoped that it will inspire renewed efforts to study and conserve an animal which is now showing worrying signs of decline.”

“The otter’s reputation is well served by this readable account.”

“This monograph tells both sides of the story and pulls no punches and must be the best account and resume of otters and their problems and their success than any other book I have read. It deals with the whole spectrum from persecution to folklore and sport to commercial enterprise.”

“A fascinating text, many illustrations and good value for money . . . a ‘must-have’ of a book.”