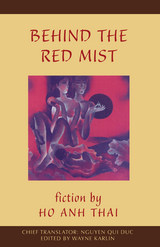 Northwestern University Press, 1998
Paper: 978-1-880684-54-2
Behind the Red Mist gives us for the first time in English a wide range of stories from the most important writer of the post-war generation in Vietnam. The characters range from a party official who turns into a goat while watching porno movies, to an Indian who carries his mother's bones in his knapsack, to a war widow trying desperately to piece together her life through the fragments of debris she collects from her back yard. The title novella "Behind the Red Mist" is a Vietnamese "Back To the Future", a social satire in which a young man in the Hanoi of the eighties receives an electric shock and is transported back to his same apartment block in 1967 wartime Vietnam during the American bombing. He not only witnesses the war with the eyes of someone who knows its outcome, but participates in his parents' courtship and discovers some truths about the generation held up to his own as a role model.
AUTHOR BIOGRAPHY
One of the Vietnam's most prolific writers and winner of several of its most prestigious literary awards, Ho Anh Thai was published in leading literary magazines while still in high school. The author of fifteen novels and short story collections, he is also a diplomat who served in India and the Middle East. Currently he is an editor for World Affairs Weekly.

Wayne Karlin is an author, editor, and teacher. As the American consulting editor for Curbstone's Voices from Vietnam series, he edited and adapted translations of writers from Vietnam. A former professor of language and literature at the College of Southern Maryland, he retired in 2017 after 31 years of service.

Nguyen Qui Duc is a Vietnamese American radio broadcaster, writer, editor, and translator. He lived in the United States from 1975 to 2006. Currently, he lives in Hanoi.
TABLE OF CONTENTS