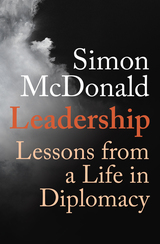 A British diplomat shares lessons on leadership gained over his expansive career.

Simon McDonald argues that we should reflect on the nature and strategies of leadership before entering a leadership role, and we should look to examples of others to help us in shaping our own approaches.

Over nearly four decades in Her Majesty's Diplomatic Service, McDonald worked for four permanent under-secretaries and a dozen senior ambassadors before becoming a permanent under-secretary himself and leading the Service—which has over 14,000 staff members in 270 countries—for five years. He also worked directly for six foreign secretaries and under five prime ministers. Observing these people undertaking such important and difficult work, McDonald saw the behaviors which helped them achieve their objectives, as well as those which hindered them.

In this book, McDonald synthesizes the skills he’s learned through his many years working in diplomacy, offering an insightful contribution amid heightening debates over the leadership of the United Kingdom. Considering the future of British leadership, he makes a case for the reform of the monarchy, the cabinet, civil service, and, in particular, the House of Lords, of which he has been a member since 2021.
AUTHOR BIOGRAPHY
Simon McDonald was the British ambassador to Germany and later permanent under-secretary at the Foreign and Commonwealth Office and head of the Diplomatic Service. He is master of Christ’s College, Cambridge.

REVIEWS
"An enjoyable read packed with insights from someone who was 'on the spot' when the United Kingdom responded to significant international challenges... Simon guides the reader to appreciate what constitutes good leadership while
also casting shards of light on some of those at the top of international governance who displayed those qualities."
— The House Magazine