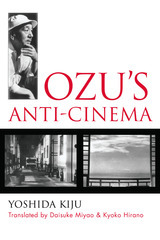 Yoshida starts his award-winning Ozu's Anti-Cinema with a story about his trip to Ozu's deathbed. Yoshida writes that a dying Ozu whispered to him twice, as if speaking to himself, "Cinema is drama, not accident." These cryptic last words troubled Yoshida for decades, and throughout this book he examines Ozu's films and tries to uncover what Ozu really meant. The book's main discussion concerns Ozu's films, but it is also Yoshida's manifesto on films and filmmaking. In other words, this book is Yoshida's personal journey into Ozu's thoughts on filmmaking and, simultaneously, into his own thoughts on the nature of cinema. Every page displays the sensibility of one artist discussing another--this is probably a book that only a filmmaker could write. Within Yoshida's luminous prose lies a finely tuned, rigorous analysis of Ozu's films, which have rarely been engaged as closely and personally as here.
AUTHOR BIOGRAPHY
Kiju Yoshida is a film director, writer, and filmmaker.
REQUEST ACCESSIBLE FILE