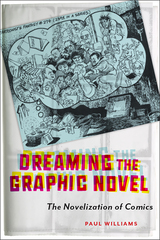 The term “graphic novel” was first coined in 1964, but it wouldn’t be broadly used until the 1980s, when graphic novels such as Watchmen and Maus achieved commercial success and critical acclaim. What happened in the intervening years, after the graphic novel was conceptualized yet before it was widely recognized?

Dreaming the Graphic Novel examines how notions of the graphic novel began to coalesce in the 1970s, a time of great change for American comics, with declining sales of mainstream periodicals, the arrival of specialty comics stores, and (at least initially) a thriving underground comix scene. Surveying the eclectic array of long comics narratives that emerged from this fertile period, Paul Williams investigates many texts that have fallen out of graphic novel history. As he demonstrates, the question of what makes a text a ‘graphic novel’ was the subject of fierce debate among fans, creators, and publishers, inspiring arguments about the literariness of comics that are still taking place among scholars today.

Unearthing a treasure trove of fanzines, adverts, and unpublished letters, Dreaming the Graphic Novel gives readers an exciting inside look at a pivotal moment in the art form’s development.
AUTHOR BIOGRAPHY
PAUL WILLIAMS is a Senior Lecturer in Twentieth-Century Literature at the University of Exeter in the U.K. The author of the books Race, Ethnicity and Nuclear War: Representations of Nuclear Weapons and Post-Apocalyptic Worlds (2011) and Paul Gilroy (2012), he has also published numerous articles and book chapters on the history of comics.

REVIEWS
"A thoughtful and engaging exploration of the complex disagreements and debates over the term, form and temporality of the 'graphic novel.'"
— Mel Gibson, editor of Superheroes and Identities

"The 1970s are one of the most under-appreciated periods in the history of comic books. As sales collapsed, comic book publishers grasped at any innovation that offered a potential road forward. Paul Williams’s masterful study focuses on this chaotic period as it traces the complex ways that catastrophic change spurred a fundamental reconsideration of what comic books were and could be. Drawing on a vast array of historical documents, Williams shows how the graphic novel became the cultural format of our time."
— Bart Beaty, author of The Greatest Comic Book of All Time