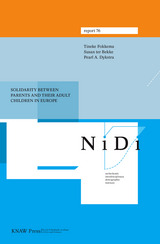 At present, our knowledge of the current state of solidarity between parents and their adult children in Europe is limited. Insight into contemporary intergenerational solidarity is not only important for the well-being of individuals but is also of great interest to policy makers. Patterns of intergenerational solidarity are not only affected by social policies and services but also reveal a number of important social policy issues and dilemmas. Will encouraging labour force participation among women and older workers mean they have less time to care for their dependents? Should formal care services be further expanded to relieve the burden faced by family members with the risk that they start to replace informal care?

This report aims to contribute to this insight by providing a more differentiated picture of the strength, nature and direction of solidarity between parents and their adult children, its variation among European countries and its determinants. Our findings indicate that parent-child ties are quite strong. The majority of Europeans aged 50 and over live in close proximity and are in frequent contact with at least one of the children. Moreover, strong family care obligations still exist and a substantial amount of support is being exchanged between parents and their non-co resident children.

Interesting differences, however, emerge between individuals and countries. While fathers are more inclined to assist their children financially, mothers have more frequent contact and exchange more help in kind with their children. Being religious and having a large family have a positive impact on several dimensions of intergenerational solidarity. Parental divorce and a better socioeconomic position of parents and children, on the other hand, lead to a weakening of parent-child ties in many respects. Contrary to common belief, employed children show solidarity with their parents as much as those without a paid job. Differences in the nature of intergenerational solidarity between the European countries tend to follow the general division into an individualistic north and a familistic south.