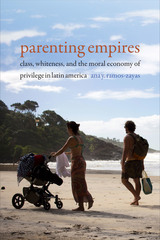 In Parenting Empires, Ana Y. Ramos-Zayas focuses on the parenting practices of Latin American urban elites to analyze how everyday experiences of whiteness, privilege, and inequality reinforce national and hemispheric idioms of anti-corruption and austerity. Ramos-Zayas shows that for upper-class residents in the affluent neighborhoods of Ipanema (Rio de Janeiro) and El Condado (San Juan), parenting is particularly effective in providing moral grounding for neoliberal projects that disadvantage the overwhelmingly poor and racialized people who care for and teach their children. Wealthy parents in Ipanema and El Condado cultivate a liberal cosmopolitanism by living in multicultural city neighborhoods rather than gated suburban communities. Yet as Ramos-Zayas reveals, their parenting strategies, which stress spirituality, empathy, and equality, allow them to preserve and reproduce their white privilege. Defining this moral economy as “parenting empires,” she sheds light on how child-rearing practices permit urban elites in the Global South to sustain and profit from entrenched social and racial hierarchies.
AUTHOR BIOGRAPHY
Ana Y. Ramos-Zayas is Professor of American Studies; Ethnicity, Race, and Migration; and Women, Gender, and Sexuality Studies at Yale University and author of Street Therapists: Race, Affect, and Neoliberal Personhood in Latino Newark and National Performances: The Politics of Class, Race, and Space in Puerto Rican Chicago.
REVIEWS
-- Laura Briggs, author of Reproducing Empire: Race, Sex, Science, and U.S. Imperialism in Puerto Rico


-- Rachel Sherman, author of Uneasy Street: The Anxieties of Affluence