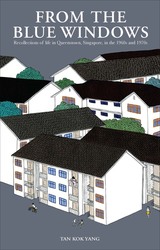 Imagine a Singapore in which flat rental was S$50 a month, a plate of noodles cost as little as 20 cents, and television broadcasts ended at 10pm every night.
From the Blue Windows is a collection of Tan Kok Yang's memories of growing up in Queenstown back when the tallest residential building there was fourteen storeys, the Alexandra Canal flooded regularly, and wayang shows were a regular feature on Mei Ling Street. He stayed in Princess Estate, an area that was colloquially known as "the Blue Windows" because of its unique blue glass louvred windows.


With nostalgia and a sense of loss, this memoir is a personal tribute to and celebration of Queenstown and a simple but fulfilling way of life that has all but vanished from modern Singapore.