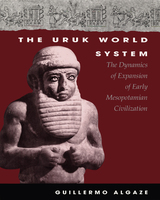 The Uruk World System: The Dynamics of Expansion of Early Mesopotamian Civilization
by Guillermo Algaze
University of Chicago Press, 1993
Cloth: 978-0-226-01381-7
Archaeologists and historians have long been keenly interested in the emergence of early cities and states in the ancient Near East, particularly in the growth of early Sumerian civilization in the lowlands of Mesopotamia during the second half of the fourth millennium B.C. Most scholars have focused on the internal transformations attending this process, such as the development of new forms of spatial organization, socio-political relationships, and economic arrangements.

In The Uruk World System, Guillermo Algaze concentrates instead on the unprecedented and wide-ranging process of external expansion that coincided with the rapid initial crystallization of Mesopotamian civilization. He contends that the rise of early Sumerian polities cannot be understood without also taking into account developments in surrounding peripheral areas.

Algaze reviews an extensive body of archaeological evidence for cross-cultural exchange between the nascent city-states in the Mesopotamian lowlands and communities in immediately surrounding areas. He shows that at their very inception the more highly integrated lowland centers succeeded in establishing a variety of isolated, far-flung outposts in areas at the periphery of the Mesopotamian lowlands. Embedded in an alien hinterland characterized by demonstrably less complex societies, the outposts were commonly established at the apex of preexisting regional settlement hierarchies and invariably at focal nodes astride important trade routes. Algaze argues that these early colonial out-posts served as collection points for coveted peripheral resources acquired in exchange for core manufactures and that they reflect an inherently asymmetrical system of economic hegemony that extended far beyond areas under the direct political control of Sumerian polities in southern Mesopotamia. From this he concludes that economic exploitation of less developed peripheral areas was integral to the earliest development of civilization in the ancient Near East.
AUTHOR BIOGRAPHY
Guillermo Algaze, a MacArthur Fellow, is professor and chair of the Department of Anthropology at the University of California, San Diego.
TABLE OF CONTENTS