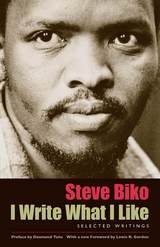 "The most potent weapon in the hands of the oppressor is the mind of the oppressed." Like all of Steve Biko's writings, those words testify to the passion, courage, and keen insight that made him one of the most powerful figures in South Africa's struggle against apartheid. They also reflect his conviction that black people in South Africa could not be liberated until they united to break their chains of servitude, a key tenet of the Black Consciousness movement that he helped found.

I Write What I Like contains a selection of Biko's writings from 1969, when he became the president of the South African Students' Organization, to 1972, when he was prohibited from publishing. The collection also includes a preface by Archbishop Desmond Tutu; an introduction by Malusi and Thoko Mpumlwana, who were both involved with Biko in the Black Consciousness movement; a memoir of Biko by Father Aelred Stubbs, his longtime pastor and friend; and a new foreword by Professor Lewis Gordon.

Biko's writings will inspire and educate anyone concerned with issues of racism, postcolonialism, and black nationalism.

AUTHOR BIOGRAPHY
Steve Biko (1946-78) is regarded as the father of the Black Consciousness movement in South Africa and a key figure in bringing about the end of apartheid. He was murdered while in police detention in 1978.
TABLE OF CONTENTS


Acknowledgments
Foreword by Lewis R. Gordon
Editor's Preface
Preface by Archbishop Desmond Tutu
Introduction
Glossary
1. Biographical Summary
2. SASO—its Role, its Significance and Its Future
3. Letter to SRC Presidents
4. Black Campuses and Current Feelings
5. Black Souls in White Skins?
6. We Blacks
7. Fragmentation of the Black Resistance
8. Some African Cultural Concepts
9. The Definition of Black Consciousness
10. The Church as seen by a Young Layman
11. White Racism and Black Consciousness
12. Fear—an important Determinant in South African Politics
13. Let's talk about Bantustans
14. Black Consciousness and the Quest for a True Humanity
15. What is Black Consciousness?
16. 'The Righteousness of our Strength'
17. American Policy towards Azania
18. Our Strategy for Liberation
19. On Death
Martyr of Hope: A Personal Memoir
by Aelred Stubbs C.R.