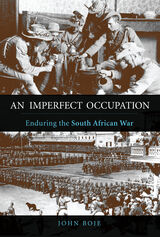 The South African War (1899–1902), also called the Boer War and Anglo-Boer War, began as a conventional conflict. It escalated into a savage irregular war fought between the two Boer republics and a British imperial force that adopted a scorched-earth policy and used concentration camps to break the will of Afrikaner patriots and Boer guerrillas. In An Imperfect Occupation , John Boje delves into the agonizing choices faced by Winburg district residents during the British occupation. Afrikaner men fought or evaded combat or collaborated; Afrikaner women fled over the veld or submitted to life in the camps; and black Africans weighed the life or death consequences of taking sides. Boje's sensitive analysis showcases the motives, actions, and reactions of Boers and Africans alike as initial British accommodation gave way to ruthlessness. Challenging notions of Boer unity and homogeneity, Boje illustrates the precarious tightrope of resistance, neutrality, and collaboration walked by people on all sides. He also reveals how the repercussions of the war's transformative effect on Afrikaner identity plays out in today's South Africa. Readable and compassionate, An Imperfect Occupation provides a dramatic account of the often overlooked aspects of one of the first "modern" wars.
AUTHOR BIOGRAPHY
John Boje spent 38 years in the service of St Alban's College in Pretoria, South Africa. His four grandparents lived in the Winburg district and their varied experiences of the war were typical of those recorded here.
John Boje is a research associate of the Department of Historical and Heritage Studies at the University of Pretoria.
TABLE OF CONTENTS
Cover
Title Page
Copyright
Contents
Preface
Introduction
1. Occupation and Insurgency
2. The Failure of Protection
3. From Neutrality to Collaboration
4. War against Women
5. In Captivity
6. White Man’s War
7. The Aftermath of War
Conclusion
Notes
Sources
Index