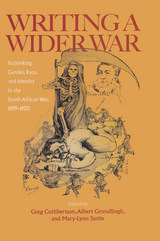 A century after the South African War (1899-1902), historians are beginning to reevaluate the accepted wisdom regarding the scope of the war, its participants, and its impact. Writing a Wider War charts some of the changing historical constructions of the memorialization of suffering during the war.

Writing a Wider War presents a dramatically new interpretation of the role of Boer women in the conflict and profoundly changes how we look at the making of Afrikaner nationalism. African experiences of the war are also examined, highlighting racial subjugation in the context of colonial war and black participation, and showcasing important new research by African historians.

The collection includes a reassessment of British imperialism and probing essays on J. A. Hobson; the masculinist nature of life on commando among Boer soldiers; Anglo-Jewry; secularism; health and medicine; nursing, women, and disease in the concentration camps; and the rivalry between British politicians and generals. An examination of the importance of the South African War in contemporary British political economy, and the part played by imperial propaganda, rounds off a thoroughly groundbreaking reinterpretation of this formative event in South Africa's history.

Greg Cuthbertson is chair of the department of history at the University of South Africa and coordinating editor of the South African Historical Journal.

Albert Grundlingh is professor of history at the University of Stellenbosch.

Mary-Lynn Suttie is a senior research librarian for history and politics at the University of South Africa.