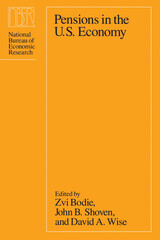 Pensions in the U.S. Economy is the fourth in a series on pensions from the National Bureau of Economic Research. For both economists and policymakers, this volume makes a valuable contribution to current research on pensions and the economics of the elderly. The contributors report on retirement saving of individuals and the saving that results from corporate funding of pension plans, and they examine particular aspects of the plans themselves from the employee's point of view.

Steven F. Venti and David A. Wise offer a careful analysis of who contributes to IRAs and why. Benjamin M. Friedman and Mark Warshawsky look at the reasons more retirement saving is not used to purchase annuities. Personal saving through pension contribution is discussed by B. Douglas Bernheim and John B. Shoven in the context of recent government and corporate pension funding changes. Michael J. Boskin and John B. Shoven analyze indicators of the economic well-being of the elderly, addressing the problem of why a large fraction of the elderly remain poor despite a general improvement in the economic status of the group as a whole. The relative merits of defined contribution versus defined benefit plans, with emphasis on the risk aspects of the two types of plans for the individual, are examined by Zvi Bodie, Alan J. Marcus, and Robert C. Merton. In the final paper, pension plans and worker turnover are the focus of the discussion by Edward P. Lazear and Robert L. Moore, who propose pension option value rather than the commonly used accrued pension wealth as a measure of pension value.
AUTHOR BIOGRAPHY
Zvi Bodie is professor of finance at the School of Management, Boston University. John B. Shoven is professor of economics at Stanford University. David A. Wise is the John F. Stambaugh Professor of Political Economy at the John F. Kennedy School of Government at Harvard University. All three are research associates of the National Bureau of Economic Research.
TABLE OF CONTENTS

1. The Determinants of IRA Contributions and the Effect of Limit Changes
Steven F. Venti and David A. Wise
Comment: Gary Burtless