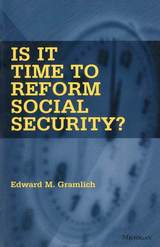 Social Security is now the federal government's largest, and probably its most popular, program. It has performed well and grown hugely over the twentieth century, with the trust fund that pays benefits generally being kept financially solvent and paying people a decent return on their contributions.
But all of that could change, with the slowdown in fertility, longer life expectancies, and slower economic growth expected for the twenty-first century. Now it looks as though a continuation of the present system will entail progressively higher payroll tax rates and progressively lower rates of return on people's contributions, especially for younger Americans.
Edward M. Gramlich, who chaired the Social Security Advisory Council that concluded its two-and-a- half-year investigation in January 1997, believes there is just one way to preserve the main social protections of Social Security while still restoring its financial affordability. This approach involves moving to more advanced funding of future benefit costs.Gramlich argues for a sensible way to bring about such a change, by combining modest curbs on the future growth of benefits with mandatory saving accounts on top of Social Security. The combination cuts the future growth in pension spending, restores the finances of the trust fund, and makes Social Security benefits affordable to the nation as a whole.
The book also reviews some prominent Social Security-type program reform efforts also underway in other parts of the world. It shows how the type of Social Security reform suggested above compares favorably to the reforms now being undertaken in countries such as the United Kingdom, Australia, and Chile.
Written in an accessible and engaging style, the book is a must-read for all people who wish to be well informed about Social Security reform, the outcome of which will affect all U.S. citizens, how we view and save for our future, and how we will live once we retire.
"Social security is one of the most talked about economic and social policy issues of the decade. Almost everybody knows something about it, but few of us know what should be done to keep it solvent and sufficient. In plain language, Gramlich lays out the issues and explains the options. Is It Time to Reform Social Security? will be an informative guide for the concerned public and a valued reference for responsible policy makers." --Lana Pollack, President of the Michigan Environmental Council and former Michigan State Representative
". . . a clear, concise, nontechnical overview of Social Security and its future funding problems by a very knowledgeable and well-respected analyst. Gramlich discusses a wide range of reform options, drawn from both home and abroad. His own proposal, to 'mend it rather than end it,' is an attractive compromise between those who prefer as little reform as possible, and thos who want to change fundamentally a system that has worked well for sixty years." --Joseph Quinn, Boston College
Edward M. Gramlich is Professor of Economics and Dean of the School of Public Policy, University of Michigan.
TABLE OF CONTENTS
Contents
Preface
1. Mending, but Not Ending, Social Security
2. Social Security in the Twentieth Century
3. Social Security in the Twenty-first Century
4. The Goals of Reform
5. New Approaches
6. Looking Outward
Appendix: Publicly Held Individual Accounts
Notes
References
Index
REQUEST ACCESSIBLE FILE