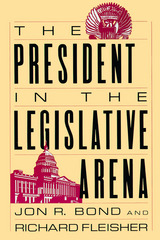 In recent years, the executive branch's ability to maneuver legislation through Congress has become the measure of presidential success or failure. Although the victor of legislative battles is often readily discernible, debate is growing over how such victories are achieved.

In The President in the Legislative Arena, Jon R. Bond and Richard Fleisher depart dramatically from the concern with presidential influence that has dominated research on presidential-congressional relations for the past thirty years. Of the many possible factors involved in presidential success, those beyond presidential control have long been deemed unworthy of study. Bond and Fleisher disagree. Turning to democratic theory, they insist that it is vitally important to understand the conditions under which the executive brance prevails, regardless of the source of that success. Accordingly, they provide a thorough and unprecedented analysis of presidential success on congressional roll-call votes from 1953 through 1984. Their research demonstrates that the degree of cooperation between the two branches is much more systematically linked to the partisan and ideological makeup of Congress than to the president's bargaining ability and popularity. Thus the composition of Congress "inherited" by the president is the single most significant determinant of the success or failure of the executive branch.
AUTHOR BIOGRAPHY
Jon R. Bond is professor of political science at Texas A&M University. Richard Fleisher is associate professor of political science at Fordham University.
TABLE OF CONTENTS