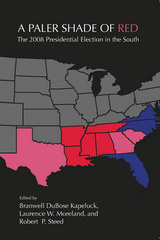 The scholars included in A Paler Shade of Red cover the 2008 presidential election with detailed, state-by-state analyses of how the presidential election, from the nomination struggle through the casting of votes in November, played out in the South. The book also includes examinations of important elections other than for president, and in addition to the single-state perspectives, there are three chapters that look at the region as a whole. Contributors are Scott E. Buchanan, John A. Clark, Patrick R. Cotter, Charles Bullock III, Rogert E. Hogan and Eunice H. McCarney, David A. Breaux and Stephen D. Shaffer, Cole Blease Graham, Jay Barth, Janine A. Parry and Todd G. Shields, Jonathan Knuckey, Charles Prysby, Ronald Keith Gaddie, Brian Arbour and Mark McKenzie, and John J. McGlennon, all collected here to provide powerful insight into southern politics today.
AUTHOR BIOGRAPHY
Branwell DuBose Kapeluck is an associate professor of political science at the Citadel.
TABLE OF CONTENTS
Contents
Illustrations
Acknowledgments
Foreword
Introduction
I. The Setting and the Nominating Process
1. The Continued Convergence of Demographics and Issues
2. The 2008 Presidential Nomination Process
II. Elections in the Deep South
3. Alabama
4. Georgia
5. Louisiana
6. Mississippi
7. South Carolina
III. Elections in the Rim South
8. Arkansas
9. Florida
10. North Carolina
11. Tennessee
12. Texas
13. Virginia
Conclusion
Notes
Contributors
Index
REQUEST ACCESSIBLE FILE