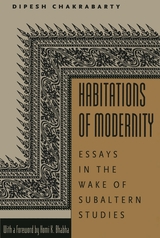 In Habitations of Modernity, Dipesh Chakrabarty explores the complexities of modernism in India and seeks principles of humaneness grounded in everyday life that may elude grand political theories. The questions that motivate Chakrabarty are shared by all postcolonial historians and anthropologists: How do we think about the legacy of the European Enlightenment in lands far from Europe in geography or history? How can we envision ways of being modern that speak to what is shared around the world, as well as to cultural diversity? How do we resist the tendency to justify the violence accompanying triumphalist moments of modernity?

Chakrabarty pursues these issues in a series of closely linked essays, ranging from a history of the influential Indian series Subaltern Studies to examinations of specific cultural practices in modern India, such as the use of khadi—Gandhian style of dress—by male politicians and the politics of civic consciousness in public spaces. He concludes with considerations of the ethical dilemmas that arise when one writes on behalf of social justice projects.
AUTHOR BIOGRAPHY
Dipesh Chakrabarty is a professor of history and of South Asian languages and civilizations at the University of Chicago,, He is the author of Rethinking Working-Class History: Bengal 1890-1940 and Provincializing Europe: Postcolonial Thought and Historical Difference.
TABLE OF CONTENTS


Foreword by Homi K. Bhabha
Acknowledgments
Introduction
Part One: Questions of History
1 A Small History of Subaltern Studies
2 Subaltern Histories and Post-Enlightenment Rationalism
3 Modernity and the Past: A Critical Tribute to Ashis Nandy
Part Two: Practices of Modernity
4 Khadi and the Political Man
5 Of Garbage, Modernity, and the Citizen's Gaze
6 Governmental Roots of Modern Ethnicity
Part Three: The Ethical and the In-Human
7 The Subject of Law and the Subject of Narratives
8 Memories of Displacement: The Poetry and Prejudice of Dwelling
9 The In-Human and the Ethical in Communal Violence
Notes
Index