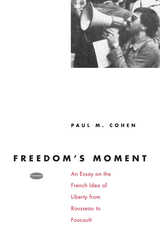 What kind of freedom, and what kind of individual, has the French Revolutionary tradition sought to propagate? Paul Cohen finds a distinctly French articulation of freedom in the texts and lives of eight renowned cultural critics who lived between the eighteenth century and the present day.

Arranged not according to the lives and times of its protagonists but to the narrative themes and structures they held in common, Cohen’s study discerns a single master narrative of liberty in modern France. He captures these radicals, whose tradition bids them to resist the authority of power structures and public opinion. They denounce bourgeois and utilitarian values, the power of Church and State, and the corrupting influence of everyday politics, and they dream of a revolutionary rupture, a fleeting instant of sometimes violent but always meaningful transgression.

An eloquent and insightful work on French political culture, Freedom's Moment also helps explain how France, even as it has oscillated between political stagnation and crisis, has held onto its faith that liberty, equality, and fraternity remain within its grasp.


Acknowledgments
A Note on Translations
1: Introduction
2: The Myth of the Consecrated Heretic
3: Hell and Other People
4: The Critique of Society
5: The Moment of Freedom
6: Conclusion
Notes
Works Cited
Index