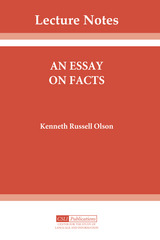 The notion of fact, as a metaphysical category, is of fairly recent vintage. As a result, perhaps, it has not received the attention that has been accorded more traditional concepts. The present study, which integrates historical exposition with philosophical analysis, aims to help rectify this situation.

The first chapter delimits the subject matter by distinguishing the metaphysical sense of the word "fact" from various epistemic and semantic ones, in the process distinguishing facts from propositions.

Chapter Two is chiefly historical. The pressures that led to the positing of facts in the latter half of the nineteenth century are discussed in the context of the history of the the doctrine of relations, beginning with Aristotle and the Scholastics.

Chapter Three takes up what the author considers the main argument in favor of admitting facts, which is due to F. H. Bradley.

The fourth and final chapter considers several versions of a well-known argument against facts due originally to Frege and Church and examines the pros and cons of various ways of getting around it.
TABLE OF CONTENTS
Cover
Contents
Preface
Introduction
Facts and Propositions
Getting Down to Brass Tacks
The House that Aristotle Built
Relations in God
Fundamentum Relationis
Facts as Foundations
The Regress Argument
Split Ens
E Pluribus Unum?
The Time Bomb
The Slingshot
Bibliography
Back Cover