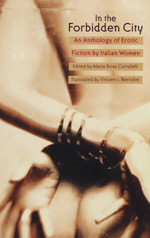 For centuries, the stereotypical image of the voluptuous Italian woman has functioned as an object of desire for Western man: from sixteenth-century paintings of Venetian courtesans who modeled for the erotically charged canvases of Titian, Veronese, and Tintoretto, to nineteenth-century reports of the beautiful dancer Marie Taglioni, to the twentieth-century cinematic images of Sophia Loren and Dominique Sanda.

Now finally available to English readers, In the Forbidden City constitutes a breakthrough volume in literary erotica by Italian women that is both profound and engaging.
AUTHOR BIOGRAPHY
Maria Rosa Cutrufelli is the author of several volumes of short fiction, as well as two novels, Canto al deserto and Il denaro in corpo. She lives in Rome.