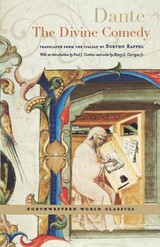 The Divine Comedy marked nothing less than the arrival of vernacular Italian as a literary language—and Dante’s book is still considered Italy’s greatest literary achievement. Its highly idiomatic verse, however, has long bedeviled English-language translators. Burton Raffel, whose translation of Don Quixote is acclaimed for making Cervantes more accessible to the modern generation, in this new translation for Northwestern World Classics, shows exciting new directions, preserving both the lyricism of the original and its incisive meaning. First-time readers and longtime fans of “the supreme poet” alike will cherish this clear and lyrical rendering of one of world literature’s masterpieces.

The Divine Comedy depicts the journey of Dante the pilgrim, guided by the poet Virgil and the love of his life, Beatrice, as he moves through the stages of his life and world. Raffel’s single-volume translation of Inferno, Purgatorio, and Paradiso follows the complete journey of a spiritual pilgrim who struggles from the depths of the inferno to the heights of paradise. In the former Dante meets many of his political enemies, suffering the punishments that match their crimes in life. And in the ninth circle of Hell, Lucifer—the ultimate traitor—is shown chewing on Brutus, Cassius, and Judas Iscariot, three others who committed horrendous acts of treason in the classical and early Jewish worlds. Dante’s evocative description of Heaven is a sort of homecoming for the exiled poet. Dante’s epic poem challenged the political and religious hierarchy of his time and remains a powerful and universal expression of human desires, strivings, and shortcomings.

as a pharmacist. He fought in the Battle of Campaldino and was active in the internecine

Florentine politics of the time, which resulted in his exile. During this time, he

began writing Commedia, which he finished shortly before his death in Ravenna.

Burton Raffel is a translator, a poet, and Distinguished Professor Emeritus of Arts

Lafayette. His most recent translations are the Modern Library edition of Geoffrey

Chaucer’s The Canterbury Tales and the Penguin edition of the Poema de mío Cid.

He has translated the Anglo-Saxon epic Beowulf, most of Horace’s poems, and Rabelais’s