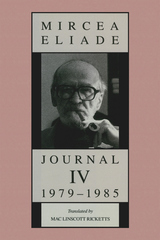 Journal IV is the first publication, in a translation from the Romanian manuscript, of the journal that Mircea Eliade kept during the last seven years of his life. In this period, Eliade is ensconced as a famous scholar—his works are being translated into many languages and books about him arrive regularly in the mail. His encounters with scholars of like repute are recorded in the journal; after a party in Paris, Eliade shares a taxi with Claude Lévi-Strauss and inadvertently makes off with his raincoat.

Running like a fault line through the peak of his success, however, is Eliade's painful awareness of his physical decline—failing vision, arthritic hands, and continual fatigue. Again and again he repeats how little time he has to finish the projects he is working on—his autobiography, the third and fourth volumes of his History of Religious Ideas, and the duties associated with his editorship of the Encyclopedia of Religion. He poignantly recounts the sharpest blow: the disorganization and eventual destruction by fire of his personal library.

Within the scope of Journal IV Eliade and his world go to ruin. What does not decline is the vivid and persistent voice of Eliade the writer, an unbreaking voice that—with death only months away—plans a reply to critics, plots out an article, and ruminates on characters to people another novella.
TABLE OF CONTENTS