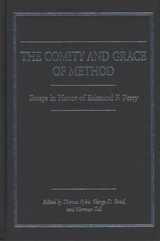 The Comity and Grace of Method: Essays in Honor of Edmund F. Perry
edited by Thomas Ryba, George D. Bond and Herman Tull
Northwestern University Press, 2004
Cloth: 978-0-8101-1891-1
A work that at once celebrates and extends the formidable contributions of the late Edmund Perry to the study of religions, this comprehensive collection brings together three generations of distinguished scholars to consider the history, theory, and applications of the comparative method in religious study. Both the title and the content of this volume reflect Perry's conviction that the comparative religionist is morally bound to contribute to a comity of religions-the voluntary and courteous recognition of the dignity and truth present in all religions. Following the general framework advocated by Perry for this pursuit, the volume reveals the strengths of such a framework-and of Perry's lifelong interest in theory and method--for religious understanding,

The essays in the first section—"Theory and Method in the History and Study of Religion"—clarify the role of scientific, phenomenological, and comparative approaches within the history of the study of religion; collectively, they represent a multifaceted statement about recurring and subtle problems in the field. In the second section—"Theories and Methods in Application"—the authors move from overarching theoretical concerns to the application of these methods in specific religious traditions, Western and Eastern. The third section demonstrates the effectiveness of these theories and methods as guidelines for promoting global inter-religious comity.

More than a fitting tribute to a revered and highly influential scholar, this book gives even those who knew nothing of Perry and his work much to learn from and ponder about the study of religion.
AUTHOR BIOGRAPHY
Thomas Ryba is Theologian in Residence at the St. Thomas Aquinas Center of Purdue University and Adjunct Professor of Philosophy and Adjunct Professor of Jewish Studies at Purdue University. He is also the author of The Essence of Phenomenology and Its Meaning for the Scientific Study of Religion (Peter Lang, 1991) and over thirty other articles on religious studies or theology.

George D. Bond is a professor in the Department of Religion at Northwestern University and the recipient of a Charles Deering McCormick Professorship of Teaching Excellence. He is the author of The Buddhist Revival in Sri Lanka (University of South Carolina Press, 1988) and The Word of the Buddha (Colombo, 1982), and is co-author/editor, with Richard Kieckhefer, of Sainthood: Its Manifestations in World Religions (University of California Press, 1990). Currently he is working on a book about contemporary lay Buddhist movements in Sri Lanka.

Herman Tull is an independent scholar residing in Princeton, New Jersey, who has taught at both Rutgers University and Princeton University. He is the author of The Vedic Origins of Karma (SUNY Press, 1989), and articles on Vedic religion, Indian literature, and the study of Indian religion.
TABLE OF CONTENTS

Part One: Theory and Method in the History of the Study of Religion

A. The Buddhist-Christian Dialogue

B. The Jewish-Christian Dialogue