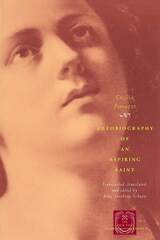 Charged by the Venetian Inquisition with the conscious and cynical feigning of holiness, Cecelia Ferrazzi (1609-1684) requested and obtained the unprecedented opportunity to defend herself through a presentation of her life story. Ferrazzi's unique inquisitorial autobiography and the transcripts of her preceding testimony, expertly transcribed and eloquently translated into English, allow us to enter an unfamiliar sector of the past and hear 'another voice'—that of a humble Venetian woman who had extraordinary experiences and exhibited exceptional courage.

Born in 1609 into an artisan family, Cecilia Ferrazzi wanted to become a nun. When her parents' death in the plague of 1630 made it financially impossible for her to enter the convent, she refused to marry and as a single laywoman set out in pursuit of holiness. Eventually she improvised a vocation: running houses of refuge for "girls in danger," young women at risk of being lured into prostitution.

Ferrazzi's frequent visions persuaded her, as well as some clerics and acquaintances among the Venetian elite, that she was on the right track. The socially valuable service she was providing enhanced this impresssion. Not everyone, however, was convinced that she was a genuine favorite of God. In 1664 she was denounced to the Inquisition.

The Inquisition convicted Ferrazzi of the pretense of sanctity. Yet her autobiographical act permits us to see in vivid detail both the opportunities and the obstacles presented to seventeenth-century women.
TABLE OF CONTENTS