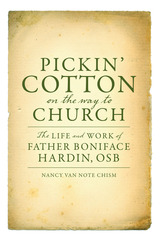 Pickin’ Cotton on the Way to Church highlights the life of Father Boniface Hardin, a Benedictine monk. James Dwight Randolph (Randy) Hardin was born on November 18, 1933, in Bardstown, Kentucky, educated in Catholic schools in Kentucky, and thirteen years old when he asked to become a priest. Excluded from the seminaries in Kentucky because of his race, he enrolled in Saint Meinrad Seminary in Spencer County, Indiana, which had just started accepting black students. After six years of study he took his vows as monk and was given the name Boniface. He was ordained a priest in 1959 and attained a graduate degree in 1963.

In 1965 Father Hardin accepted the position of associate pastor at Holy Angels Catholic Church, a predominately black parish in Indianapolis. Father Hardin was a social activist who spoke out against poverty, segregation, police brutality, and fought against the construction of an interstate highway that would adversely affect the black community. Such actions were considered inappropriate for a priest and the Archbishop of Indianapolis removed him from his position at Holy Angels.

Although reinstated due to public outcries, Father Hardin soon left Holy Angels, and, along with Sister Jane Shilling, opened the Martin Center, where they could advocate full time for the poor and disenfranchised through a series of programs and services. Realizing the correlation between education and career advancement, Father Boniface and Sister Jane founded Martin University, the only predominately African American institution of higher learning in Indiana. The university continues to play a unique role in the community, with a special focus on educational opportunities to those who have been too often discounted, discouraged, and disregarded by society.

Although Father Hardin was widely known in Indiana during his lifetime, accumulating many awards and honors, it is important to document his life and work for posterity. It is hoped that this volume will provide an overview of his story and lay the foundation for other scholarly efforts.
AUTHOR BIOGRAPHY
Nancy Chism was born and raised in New Jersey, received a bachelor’s degree in English Literature from Fordham University, a master’s degree in English Education from Smith College, and a PhD in Educational Development from Ohio State University. She moved to Indiana in 1999 and became professor of higher education and student affairs at Indiana University and associate vice chancellor for academic affairs at Indiana University–Purdue University Indianapolis. She has published books, journal articles, and chapters in her academic field. She retired in 2012 and currently is president of the board of trustees of Martin University.
TABLE OF CONTENTS
Contents
Foreword
Preface
Acknowledgments
Chapter 1. The Early Years, 1933–65: From Young Randy to Father Boniface Hardin, OSB
Chapter 2. The Holy Angels Years, 1965–69: Turmoil and a Turning Point
Chapter 3. The Martin Center Years, 1969–77: A New Vision for Solving the Race Problem
Chapter 4. The Martin University Years, 1977–2007: Developing the Haven of Hope
Chapter 5. The Final Years: 2008–12: Sorrow and Reconciliation
Afterword
Appendix. An Alphabetical List of Those Interviewed for the Study of the Life and Work of Father Boniface Hardin
Notes
Bibliography
Index