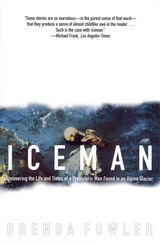 Iceman: Uncovering the Life and Times of a Prehistoric Man Found in an Alpine Glacier
by Brenda Fowler
University of Chicago Press, 2001
Paper: 978-0-226-25823-2
On September 19, 1991 a couple hiking along an Alpine ridge stumbled upon a frozen, intact corpse melting out of a glacier. He was dubbed "the Iceman," and his discovery—along with the realization that he was actually 5,000 years old—set off a whirlwind of political, scientific, and media activity that made him an overnight sensation. In this remarkable and dramatic book, Brenda Fowler takes readers through the bizarre odyssey that began in the Stone Age and continued for years after the Iceman was unearthed.
AUTHOR BIOGRAPHY
Brenda Fowler's work has appeared in the New York Times, New York Times Magazine, and The Times (UK), among other publications.
REVIEWS
“In this well-crafted retrospective, [Fowler] details the intrigue surrounding the man, who was eventually give the name Ozti. She fleshes out what we now know about Ozti’s origins and way of life, as well as how he died. . . . Fowler’s story also serves as a pointed look at the commercialization of modern science.”--<I>Science News
— Science News


A Note on Sources
Prologue - No Room in the Helicopter
1. The First to See It
2. A Difficult Recovery
3. A Great Moment for Science
4. Italy Is Watching
5. Evidence of Distress
6. The Mummy to Market
7. A Castrated Egyptian
8. Spindler's Story
9. Expanding Markets
10. "A Proper Forefather"
11. The Place He Came to Lie
Afterword
Acknowledgments
Notes
Bibliography
Index