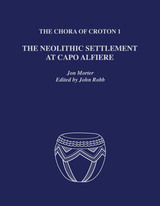 From 1974 to the present, the Institute of Classical Archaeology (ICA) at the University of Texas at Austin has carried out archaeological excavations and surveys in ancient territories (chorae) in southern Italy. This wide-ranging investigation, which covers a large number of sites and a time period ranging from prehistory to the Middle Ages, has unearthed a wealth of new information about ancient rural economies and cultures in the region. These discoveries will be published in two multivolume series (Metaponto and Croton). This volume on the Neolithic settlement at Capo Alfiere is the first in the Croton series.

The Chora of Croton 1 reports the excavation results of a remarkable Neolithic site at Capo Alfiere on the Ionian coast. Capo Alfiere is one of a very few early inhabitation sites in this area to have been excavated extensively, with a full team of scientific specialists providing interdisciplinary studies on early farming and animal husbandry. It provides comprehensive documentation of the economy, material culture, and way of life in the central Mediterranean in the sixth and fifth millennia BC. Most notable are the remains of a wattle-and-daub hut enclosed within a massive stone wall. Unique for this area, this well-preserved structure may have been used for special purposes such as ritual, as well as for habitation. The presence of Stentinello wares shows that the range of this pottery type extended further east than previously thought and casts new light on the development of ceramics in the area.

Jon Morter (now decased) was a field director for ICA excavations at Metaponto and Croton in southern Italy, and at Chersonesos in Crimea. The ICA Croton project was the subject of his dissertation, for which he received a PhD from the University of Texas at Austin. He had taken up a position teaching at the College of Charleston (South Carolina) shortly before his death.

John Robb is Reader in European Prehistory and editor of the Cambridge Archaeological Journal at Cambridge University.