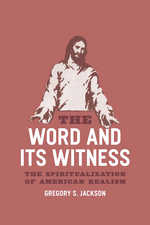 “What would Jesus do?” is now a rhetorical fixture, but the phrase was first popularized in the nineteenth century’s best-selling novel In His Steps. Charles Sheldon’s book is part of the vast, but mostly overlooked, history of evangelical culture that began during the Great Awakening. In this groundbreaking study, Gregory S. Jackson reveals the full impact of this tradition by exploring the development of religious media in America.

Jackson shows how the homiletic tradition in Protestant sermons provided a foundation for the development of visual and literary realism. Evangelical preachers and writers used vivid language grounded in everyday life to translate abstract concepts like hell into concrete reality—a key influence on realist authors that brought about the more secular forms of the movement we know today. This emphasis on the sensuous also paved the way for Protestantism’s embrace of new media, evident in the photographs of Jacob Riis as well as the video game Left Behind: Eternal Forces.

With its remarkable scope and timely insights into the interplay between religion, secularism, and politics, The Word and Its Witness will transform the way we understand American realism and American religion.
AUTHOR BIOGRAPHY
Gregory S. Jackson is assistant professor of English and American studies at Rutgers University.
TABLE OF CONTENTS

Chapter 3 “What Would Jesus Do?” Practical Christianity, Social Gospel Realism, and the Homiletic Novel
Homiletic Experiences
Who Was Jesus?
Homiletic Audiences
Enacting Allegory