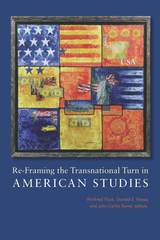 This volume is the outcome of a transatlantic conversation on the topic “Transnational America,” in which more than sixty scholars from universities in the United States and Germany gathered to assess the historical significance of and examine the academic prospects for the “transnational turn” in American studies. This development has brought about the most significant re-imagining of the field since its inception. The “transnational” has subsumed competing spatial and temporal orientations to the subject and has dismantled the foundational tenets and premises informing the methodology, periodization, pedagogy, and geographical locations of U.S. American studies, but transnational American studies scholars have not yet provided a coherent portrait of their field. This volume constitutes an effort to produce this needed portrait. The editors have gathered work from a host of senior and up-and-coming Americanists to compile a field-defining project that will influence both scholars and students of American studies for many years to come.
AUTHOR BIOGRAPHY
WINFRIED FLUCK is professor and chair of American studies at the John F. Kennedy Institute for North American Studies, Freie Universität Berlin. DONALD E. PEASE is professor of English and the Ted & Helen Geisel Third Century Professor in the Humanities at Dartmouth College. JOHN CARLOS ROWE is USC Associates’ Professor of the Humanities and chair of the Department of American Studies and Ethnicity at the University of Southern California.
TABLE OF CONTENTS