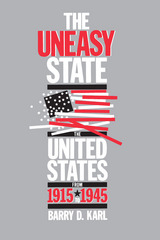 In this major interpretive history of the reform era, Barry Karl presents an imaginative and thoughtful perspective on America's quest for political, economic, and cultural nationalism. Challenging accepted interpretations, he argues that the two world wars and the depression did not successfully unite the country so that a national managerial state could emerge as it did in other industrial nations. Karl draws on an impressive array of sources to support his position, offering insightful comments on popular culture—movies, novels, comic strips, and detective stories—and brilliant analyses of technological change and its impact.

Karl shows how Americans approached the central dilemmas of modern life, such as the clash between planned efficiency and autonomous individualism, which they managed to patch over but never fully resolve. Above all, he finds that America's commitment to the autonomous individual is both an aspiration and a curse.
AUTHOR BIOGRAPHY
Barry D. Karl is the Norman and Edna Freehling Professor of History at the University of Chicago. He is also a professor in the College and in the Graduate School of Public Policy Studies. He is the author of Charles E. Merriam and the Study of Politics, also published by the University of Chicago Press.
TABLE OF CONTENTS