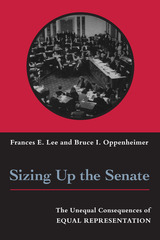 We take it for granted that every state has two representatives in the United States Senate. Apply the "one person, one vote" standard, however, and the Senate is the most malapportioned legislature in the democratic world.

But does it matter that California's 32 million people have the same number of Senate votes as Wyoming's 480,000? Frances Lee and Bruce Oppenheimer systematically show that the Senate's unique apportionment scheme profoundly shapes legislation and representation. The size of a state's population affects the senator-constituent relationship, fund-raising and elections, strategic behavior within the Senate, and, ultimately, policy decisions. They also show that less populous states consistently receive more federal funding than states with more people. In sum, Lee and Oppenheimer reveal that Senate apportionment leaves no aspect of the institution untouched.

This groundbreaking book raises new questions about one of the key institutions of American government and will interest anyone concerned with issues of representation.
TABLE OF CONTENTS