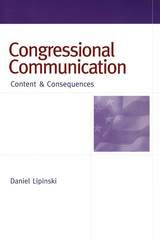 "The communication between representatives and their constituents is where election strategy and policy explanations are merged and, until now, we have had only anecdotal evidence. Lipinski's book sheds light on this important part of American political life."
--David Brady, Stanford University


Congressional Communication challenges the notion that legislators "run against Congress" by routinely denigrating the institution. Using a unique, systematic analysis of the communication from members of Congress to their constituents over a five-year period, Daniel Lipinski challenges this notion, demonstrating key partisan differences in representatives' portrayals of congressional activities. While members of the majority party tend to report that the institution-and, hence, their party-is performing well, members of the minority party are more likely to accuse Congress of doing a poor job.

The findings in Congressional Communication offer the first strong empirical evidence from the electoral arena in support of controversial party government theories. Moving beyond previous studies that look only at legislators' messages, Lipinski's research also reveals the effects of these politically strategic claims on voters, whose interpretations don't necessarily bear out the legislators' intended effects.