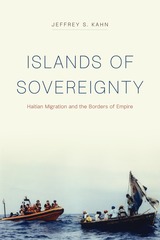 In Islands of Sovereignty, anthropologist and legal scholar Jeffrey S. Kahn offers a new interpretation of the transformation of US borders during the late twentieth century and its implications for our understanding of the nation-state as a legal and political form. Kahn takes us on a voyage into the immigration tribunals of South Florida, the Coast Guard vessels patrolling the northern Caribbean, and the camps of Guantánamo Bay—once the world’s largest US-operated migrant detention facility—to explore how litigation concerning the fate of Haitian asylum seekers gave birth to a novel paradigm of offshore oceanic migration policing. Combining ethnography—in Haiti, at Guantánamo, and alongside US migration patrols in the Caribbean—with in-depth archival research, Kahn expounds a nuanced theory of liberal empire’s dynamic tensions and its racialized geographies of securitization. An innovative historical anthropology of the modern legal imagination, Islands of Sovereignty forces us to reconsider the significance of the rise of the current US immigration border and its relation to broader shifts in the legal infrastructure of contemporary nation-states across the globe.
AUTHOR BIOGRAPHY
Jeffrey S. Kahn is assistant professor of anthropology at the University of California, Davis.
REVIEWS
“This remarkable book chronicles the making of the US maritime border as a dialectic of sovereign will and legal reason. Using an impressive array of historical and ethnographic materials on Haitian interdiction, Kahn illuminates the tensions between water and land, refugee and migrant, and imaginaries and practices of jurisdiction that have shaped the legal and political geographies of asylum in the United States and beyond. This is a brilliant and timely intervention in contemporary debates around border securitization.”
— Ajantha Subramanian, Harvard University

“Kahn’s astonishing ethnography of the law and politics of America’s interdiction of Haitian refugees at sea is heartrending, insightful, and necessary. No one concerned about the frightening history of the country’s relationship to others at another troubling moment—and no one who cares about the discretionary sovereignty of the modern state and its borders—can afford to look away from the story Kahn tells in this major intervention.”
— Samuel Moyn, Yale Law School, author of Not Enough: Human Rights in an Unequal World

"A fascinating read and a masterful example of applied multidisciplinary research."
— International Journal of Constitutional Law

"A powerful and sophisticated ethnography. . . . Required reading for everyone working on political and legal anthropology."
— Political and Legal Anthropology Review