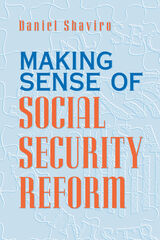 The Social Security Act of 1935 must be counted among the most monumental pieces of legislation ever passed by Congress. Today, sixty-five years after its enactment, public support for Social Security remains extremely strong. At the same time, there have been reports that Social Security is in grave danger of financial collapse, and numerous groups across the political spectrum have agitated for its reform. The president has put forward proposals to rescue Social Security, conservatives argue for its privatization, and liberals advocate increases in its funding from surplus tax revenues.

But what is the average person to make of all this? How many Americans know where the money for Social Security benefits really comes from, or who wins and loses from the system's overall operations? Few people understand the current Social Security system in even its broadest outlines. And yet Social Security reform is ranked among the most important social issues of our time.

With Making Sense of Social Security Reform, Daniel Shaviro makes an important contribution to the public understanding of the issues involved in reforming Social Security. His book clearly and straightforwardly describes the current system and the pressures that have been brought to bear upon it, before dissecting and evaluating the various reform proposals. Accessible to anyone who has an interest in the issue, Shaviro's new work is unique in offering a balanced, nonpartisan account.
AUTHOR BIOGRAPHY
Daniel Shaviro is a professor of law at New York University. He is the author of Do Deficits Matter? and When Rules Change: An Economic and Political Analysis of Transition Relief and Retroactivity, both published by the University of Chicago Press.
TABLE OF CONTENTS