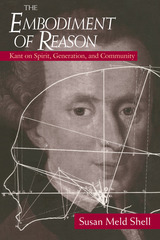 Commentators on the work of Immanuel Kant have long held that his later "critical" writings are a radical rejection of his earlier, less celebrated efforts. In this pathbreaking book, Susan Shell demonstrates not only the developmental unity of Kant's individual writings, but also the unity of his work and life experience.

Shell argues that the central animating issues of Kant's lifework concerned the perplexing relation of spirit to body. Through an exacting analysis of individual writings, Shell maps the philosophical contours of Kant's early intellectual struggles and their relation to his more mature thought. The paradox of mind in matter and the tensions it generates—between freedom and determinacy, independence and community, ideal and real—are shown to inform the whole of his work. Shell's fresh, penetrating analysis of the precritical works will surely catapult them to new prominence in Kant studies.

Shell's critique goes further to consider the context of contemporary intellectual life. She explores the fascinating realm of Kant's sexual and medical idiosyncracies, linking them to the primary concerns of his critical philosophy. She develops a sure-to-be controversial treatment of the connection between Kant's philosophy and his chronic hypochondria, and illuminates previously unforeseen connections in a remarkable convergence of life and thought, with important theoretical and practical implications for modern times.
TABLE OF CONTENTS


Acknowledgments
1: Introduction
2: Anticipations of Community: Kant and the True Estimation of Living
Forces
3: Commerce and Community in Kant's Early Thought
4: Kant's Moral Cosmology: Freedom and Desire in the Remarks concerning
"Observations on the Feeling of the Beautiful and the Sublime"
5: Dreams of a Spirit Seer
6: Community in Theory and Practice
7: Kant's Idea of History
8: Adventures of the Organism (I)
9: Adventures of the Organism (II)
10: Kant's Hypochondria: A Phenomenology of Spirit
11: Conclusion and Epilogue
Coda
Notes
Works Cited
Index