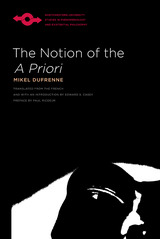 Originally published in 1966, this pivotal work of Mikel Dufrenne revises Kant’s notion of a priori, a concept previously given insufficient attention by philosophers, to realize a rich understanding that finally does justice to one of Kant’s most troubling cruxes. Following the Husserlian analytics of phenomenology, Dufrenne postulates a dualistic conception of the a priori as a structure that expresses itself outside the human subject, but also as a virtual knowledge that points to a philosophy of immediate apprehension or feeling. A friend of Paul Ricoeur, with whom he was detained as a prisoner of war during World War II, Dufrenne’s work until now has been sorely overlooked by American philosophers.

MIKEL DUFRENNE (1910–1995) is also the author of The Phenomenology of Aesthetic Experience, published by Northwestern University Press.