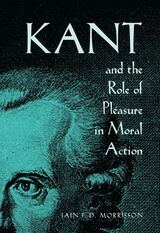 Kant scholars since the early nineteenth century have disaxadgreed about how to interpret his theory of moral motivation. Kant tells us that the feeling of respect is the incentive to moral action, but he is notoriously ambiguous on the question of what exactly this means. In Kant and the Role of Pleasure in Moral Action, Iain Morrisson offers a new view on Kant’s theory of moral action.

In a clear, straightforward style, Morrisson responds to the ongoing interpretive stalemate by taking an original approach to the problem. Whereas previous commentators have attempted to understand Kant’s feeling of respect by studying the relevant textual evidence in isolation, Morrisson illuminates this evidence by determining what Kant’s more general theory of action commits him to regarding moral action. After looking at how Kant’s treatment of desire and feeling can be reconciled with his famous account of free maxim-based action, Morrisson argues that respect moves us to moral action in a way that is structurally parallel to the way in which nonmoral pleasure motivates nonmoral action.

In reconstructing a unified theory of action in Kant, Morrisson integrates a number of distinct elements in his practical philosophy. Kant and the Role of Pleasure in Moral Action is part of a new wave of interest in Kant’s anthropological (that is, psychological) works.

Iain P. D. Morrisson is an instructional assistant professor in the Honors College at the University of Houston. He has published numerous articles on Kant and Nietzsche, including pieces in the Southern Journal of Philosophy and History of Philosophy Quarterly.