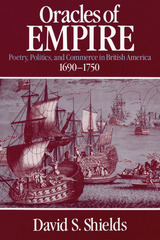 This innovative look at previously neglected poetry in British America represents a major contribution to our understanding of early American culture. Spanning the period from the Glorious Revolution (1690) to the end of King George's War (1750), this study critically reconstitutes the literature of empire in the thirteen colonies, Canada, and the West Indies by investigating over 300 texts in mixed print and manuscript sources, including poems in pamphlets and newspapers.

British America's poetry of empire was dominated by three issues: mercantilism's promise that civilization and wealth would be transmitted from London to the provinces; the debate over the extent of metropolitan prerogatives in law and commerce when they obtruded upon provincial rights and interests; and the argument that Britain's imperium pelagi was an ethical empire, because it depended upon the morality of trade, while the empires of Spain and France were immoral empires because they were grounded upon conquest. In discussing these issues, Shields provides a virtual anthology of poems long lost to students of American literature.
AUTHOR BIOGRAPHY
David S. Shields is associate professor of English at the Citadel in Charleston, South Carolina.
TABLE OF CONTENTS


Acknowledgments
Introduction: The Issue of Empire in the Literary Self-Understanding of British Americans
Part One - The British Empire and the Poetry of Commerce
1. The Literary Topology of Mercantilism
2. The Tide of Empire
Imperium Pelagi
"The Sea-Piece"
The Tribulations of Columbus
Blood and Brine
3. The Material Redeemers
The Archetype of Liberty and Law
The Benefactor
4. Staples
Trading Weed
Dyer's "Fleece"
"Indico"
"The Sugar-Cane"
Islands of Iniquity
The Deserted Plantation
Heroic Agriculture
Part Two - The Paper Wars over the Prerogative
5. The Problem of the Prerogative
6. The Paper Wars in Massachusetts
Old Charter
The Pharaoh of Prerogative
The Passing of the Mantle
The Problem of Old Sarum's Son
"Belcher Apostate"
7. The Spread of Boston Principles
The Keeper
The Power of Fable
"The Mock Monarchy or Kingdom of Apes"
Bestial Riddles
Ballad War
The Riddle
Part Three - The Rhetoric of Imperial Animosity
8. Empire of Evil
"Zeuma; or, The Love of Liberty" (1729)
The War of Jenkins' Ear
9. Gallic Perfidy
Antichrist in the Wilderness
The Violence of Popular Feeling
"Indian Songs of Peace"
The Conquest of Louisbourg
10. The Tenuousness of Imperial Identity
The Sum of All Prophecies
Notes
Bibliography of Sources
Canada
New England
New York and New Jersey
Pennsylvania
The Chesopean Colonies
The Carolinas
Georgia
West Indies
Metropolitan Writings
Index