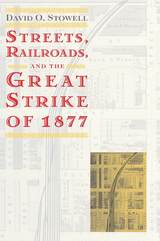 For one week in late July of 1877, America shook with anger and fear as a variety of urban residents, mostly working class, attacked railroad property in dozens of towns and cities. The Great Strike of 1877 was one of the largest and most violent urban uprisings in American history.

Whereas most historians treat the event solely as a massive labor strike that targeted the railroads, David O. Stowell examines America's predicament more broadly to uncover the roots of this rebellion. He studies the urban origins of the Strike in three upstate New York cities—Buffalo, Albany, and Syracuse. He finds that locomotives rumbled through crowded urban spaces, sending panicked horses and their wagons careening through streets. Hundreds of people were killed and injured with appalling regularity. The trains also disrupted street traffic and obstructed certain forms of commerce. For these reasons, Stowell argues, The Great Strike was not simply an uprising fueled by disgruntled workers. Rather, it was a grave reflection of one of the most direct and damaging ways many people experienced the Industrial Revolution.

"Through meticulously crafted case studies . . . the author advances the thesis that the strike had urban roots, that in substantial part it represented a community uprising. . . .A particular strength of the book is Stowell's description of the horrendous accidents, the toll in human life, and the continual disruption of craft, business, and ordinary movement engendered by building railroads into the heart of cities."—Charles N. Glaab, American Historical Review
TABLE OF CONTENTS


List of Illustrations
Acknowledgments
Introduction
1. The "Industrial Revolution Incarnate"
2. The Contested Terrain of the Streets
3. Striking against the Railroads
4. Who Was in the Crowd?
5. The Aftermath
Conclusion: The Great Strike as Urban History
Notes
Selected Bibliography
Index