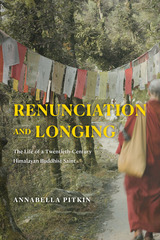 Through the eventful life of a Himalayan Buddhist teacher, Khunu Lama, this study reimagines cultural continuity beyond the binary of traditional and modern.

In the early twentieth century, Khunu Lama journeyed across Tibet and India, meeting Buddhist masters while sometimes living, so his students say, on cold porridge and water. Yet this elusive wandering renunciant became a revered teacher of the Fourteenth Dalai Lama. At Khunu Lama’s death in 1977, he was mourned by Himalayan nuns, Tibetan lamas, and American meditators alike. The many surviving stories about him reveal significant dimensions of Tibetan Buddhism, shedding new light on questions of religious affect and memory that reimagines cultural continuity beyond the binary of traditional and modern.

In Renunciation and Longing, Annabella Pitkin explores devotion, renunciation, and the teacher-student lineage relationship as resources for understanding Tibetan Buddhist approaches to modernity. By examining narrative accounts of the life of a remarkable twentieth-century Himalayan Buddhist and focusing on his remembered identity as a renunciant bodhisattva, Pitkin illuminates Tibetan and Himalayan practices of memory, affective connection, and mourning. Refuting long-standing caricatures of Tibetan Buddhist communities as unable to be modern because of their religious commitments, Pitkin shows instead how twentieth- and twenty-first-century Tibetan and Himalayan Buddhist narrators have used themes of renunciation, devotion, and lineage as touchstones for negotiating loss and vitalizing continuity.
AUTHOR BIOGRAPHY
Annabella Pitkin is assistant professor of Buddhism and East Asian religions at Lehigh University.

REVIEWS
"Renunciation and Longing is an original, thought-provoking, and deeply insightful analysis of a raft of issues important to Tibetan Buddhists—an important contribution to our understanding of Tibetan Buddhism, both in theory and in practice, both in its traditional articulation and in its modern delineations."
— Roger Jackson, Carleton College

“Through the life of the elusive hermit Khunu Lama, Pitkin crafts a rich tapestry of Buddhist networks across Himalaya—from Kham to Kinnau. Situated in the historical exigencies of the twentieth-century, Renunciation and Longing illuminates loss and disruption as an integral part of devotion and lineage continuity.”
— Holly Gayley, University of Colorado Boulder

“Pitkin replaces the caricature of emotionless Buddhists with a lively story of disciples so devoted in their faith that they are marked by intense longing for the teacher. Connecting the original story of the Buddha to that of a twentieth-century lama, she weaves a complex tapestry of the affective world of Buddhist renunciates that will richly repay readers’ attention."
— Gray Tuttle, Columbia University


Acknowledgments
Technical Note on Phonetic Transcription and Transliteration
Maps of Khunu Lama’s Travels
Chronology
Introduction Themes in the Life of a Twentieth-Century Himalayan Buddhist Renunciant
Chapter One “Like Water into Water”: Transmission Lineages in Tibetan Buddhism
Chapter Two “He abandoned his homeland for the sake of the Dharma”: Tibetan Buddhist Imaginaries of Home-Leaving and Renunciation
Chapter Three “Aim Your Dharma Practice at a Beggar’s Life”
Chapter Four Dislocation and Continuity
Chapter Five “With such devotion that tears cascade from your eyes”: Renunciation, Separation, and Guru Devotion
Chapter Six Death and Other Disruptions: Dying Like a Dog in the Wilderness
Epilogue
Glossary
Notes
Bibliography
Index