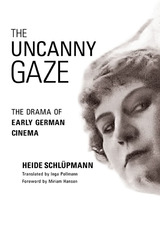 The Uncanny Gaze: The Drama of Early German Cinema
by Heide Schlupmann
translated by Inga Pollmann
foreword by Miriam Hansen

Heide Schlüpmann's classic study of early German cinema was published in German as Unheimlichkeit des Blicks: Das Drama des Frühen deutschen Kinos in 1990. For the first time in English, this translation makes available her feminist examination of German cinema and Germany in the sociopolitical context of Wilhelmine society. By examining then-unknown pre-World War I narrative films, this study paints a picture of the conflicted early years of the German cinema. During this period cinema and film production were able to develop independently from the cultural bourgeoisie and relied on those forces excluded from high "culture": technology, business, performers, showmen, and actors. In cinema, the dime novel and kitsch were exhibited for all, and the internationalism of modernity prevailed over the prevailing nationalism of the period.

Featuring a foreword by film scholar Miriam Hansen and a new afterword by Schlüpmann, this volume performs a critical perusal of film commentary and offers an in-depth look at little-known films in early German cinema.

Heide Schlüpmann is a professor of film at Johann Wolfgang Goethe-Universitat in Frankfurt, Germany, a coeditor of the journal Frauen und Film (Women and Film), and the author of Öffentliche Intimität: Die Theorie im Kino (Public Intimacy: Theory in the Cinema) and other works.

Inga Pollmann works as a translator and is a doctoral student in cinema and media studies at the University of Chicago.

Miriam Hansen is Ferdinand Schevill Distinguished Service Professor in the Humanities at the University of Chicago and the author of Babel and Babylon: Spectatorship in American Silent Film.