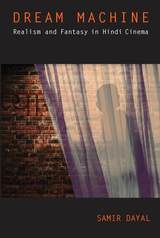 Popular Hindi films offer varied cinematic representations ranging from realistic portraits of patriotic heroes to complex fantasies that go beyond escapism. In Dream Machine, Samir Dayal provides a history of Hindi cinema starting with films made after India’s independence in 1947. He constructs a decade-by-decade consideration of Hindi cinema’s role as a site for the construction of “Indianness.”

Dayal suggests that Hindi cinema functions as both mirror and lamp, reflecting and illuminating new and possible representations of national and personal identity, beginning with early postcolonial films including Awaara and Mother India, a classic of the Golden Age. More recent films address critical social issues, such as My Name is Khan and Fire, which concern terrorism and sexuality, respectively. Dayalalso chronicles changes in the industry and in audience reception, and the influence of globalization, considering such films as Slumdog Millionaire.

Dream Machine analyzes the social and aesthetic realism of these films concerning poverty and work, the emergence of the middle class, crime, violence, and the law while arguing for their sustained and critical attention to forms of fantasy.

Samir Dayal is a Professor of English and Media Studies at Bentley University in Massachusetts. He is the author of Resisting Modernity: Counternarratives of Nation and Masculinity in Pre-Independence India; a co-editor, with Margueritte Murphy, of Global Babel: Questions of Discourse and Communication in a Time of Globalization; and the editor of the Cultural Studies Series, which includes Julia Kristeva’s Crisis of the European Subject.