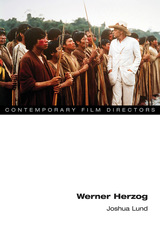 Werner Herzog's protean imagination has produced a filmography that is nothing less than a sustained meditation on the modern human condition. Though Herzog takes his topics from around the world, the Americas have provided the setting and subject matter for iconic works ranging from Aquirre, The Wrath of God and Fitzcarraldo to Grizzly Man.

Joshua Lund offers the first systematic interpretation of Werner Herzog's Americas-themed works, illuminating the director's career as a political filmmaker—a label Herzog himself rejects. Lund draws on materialist and post-colonial approaches to argue that Herzog's American work confronts us with the circulation, distribution, accumulation, application, and negotiation of power that resides, quietly, at the center of his films. By operating beyond conventional ideological categories, Herzog renders political ideas in radically unfamiliar ways while fearlessly confronting his viewers with questions of world-historical significance. His maddeningly opaque viewpoint challenges us to rethink discovery and conquest, migration and exploitation, resource extraction, slavery, and other foundational traumas of the contemporary human condition.

Joshua Lund is a professor of Spanish at the University of Notre Dame. He is the author of The Mestizo State: Reading Race in Modern Mexico and The Impure Imagination: Toward a Critical Hybridity in Latin American Writing.